Written by Administrator. Posted in ROOT

The latest news from TV Brittany...

As the Corona Virus restrictions lift slightly, we are happy to update you on the new Satellite receivers which have just become available.

We can now offer SkyQ or the new range of FREESAT 4K receivers, and VPN's for both systems allowing you to get all of the catch-up and Box sets.

Go to our Digibox page for much more information

If you have a “High Definition Freesat receiver" for watching UK television in your French home, you may have encountered a problem with the volume control.

I have been asked by customers many times, “I don't seem to be able to control the volume of HD channels using the satellite receiver's remote”.

This is a really niggling problem as it means you have to use the satellite remote for some channels and the TV remote for others.

Here’s a fix for the issue

It is quite easy to change this setting so that your Satellite remote will operate the volume on your TV for both HD and SD channels.

For the current HUMAX receivers, On the HUMAX REMOTE CONTROL press the HOME key, select SETTINGS, Then select PICTURE AND SOUND. Now change Digital Audio Out from "Multichannel" to "Stereo". Press the exit button and all should work okay now.

For the current MANHATTAN Receivers, on the MANHATTAN REMOTE CONTROL press MENU then SETTINGS then PICTURE & SOUND then AUDIO OUTPUT. Change it to "STEREO PCM" not AUTO

Press the back button until you get back to the TV picture.

There's a brand new TV channel coming to Freesat and it sounds like it will be right up our street.

BLAZE will be popping up in September and will offer us shows like Pawn Stars, Mountain Men and American Restoration which have only been available on Sky before.

BLAZE - which comes from the company that owns Lifetime - is also going to bring us lots of true crime stuff, so could viewers hoping to stumble across the next Making a Murderer find it there? The First 48 follows murder detectives in the first two days of cases, while Unusual Suspects features some of the weirdest investigations in history.

All to be found on channel 162

Changes to French TNT broadcasting system – via an aerial

We have had many enquiries about these changes as many people have lost their French TV channels (including us!).  At this point in time we are uncertain as to the complete solution but this is the official line, which is available in French at http://www.csa.fr/Les-reponses-du-Conseil-aux-questions-frequemment-posees-FAQ/Television/La-reception.  These are the highlights as we understand them…

On 5th April 2016 the French channels received by a TV aerial changed from MPEG-2 to MPEG-4 format resulting in many people no longer being able to receive their programmes.

It is now essential that you have either a full HD television or a TNTHD MPEG-4 adapter, connected to a correctly aligned TV aerial.  These adapters can be purchased quite cheaply at your local supermarket or DIY store, it seems though that most supermarkets are now out of stock.  I am guessing that the French were aware of this, in advance, from their local media.

If you have lost your channels, you will need to rescan your TV for the new frequencies.  This may need to be done several times over a few days as not all transmitters were completed at the same time.

So, at this time we are unsure to the resolution.  We are happy to continue to supply French TV by satellite but are unable to offer work on aerials until everything has settled.

The next generation from SKY is coming in 2016

This is going to be the most exciting thing in Home entertainment from Sky for many years, but it won't be cheap

As of November 2016, this system is not available in France.... Sorry 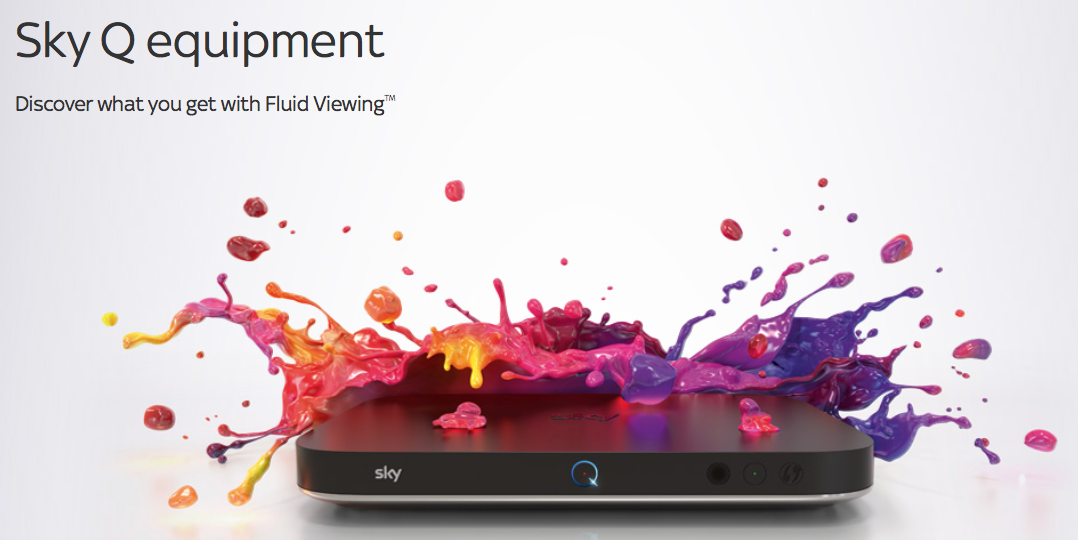 There has been a lot of talk this year about new satellites, Astra2 changes and even mis-informed well wishers on various websites spreading doom and gloom about the ability to receive UK television abroad after the changes. Even today (14 August 2013) on Radio 2, the afternoon DJ Steve Wright commented how he thinks all of the viewers in France and Spain would lose their TV stations when the changes take place (he thinks!).

The situation is as follows…

Currently there are 4 satellites, from the Astra 2 group of satellites, broadcasting the Sky and Freesat programs to the UK.  Because of the satellite footprint it has meant that all over Europe, as far down as Portugal, users have been able to watch the channels broadcast from them.

The current satellites are coming to the end of their useful life and indeed one has already been replaced (the satellite that broadcasts the FIVE group of channels eg. Channel 5, 5USA, 5* etc).  The new satellites have a much tighter beam, which means its footprint is smaller and more focussed on the UK.  In the Northern half of France, this will make NO difference to our capability of picking up the English channels.  The new satellite already broadcasting Channel 5 proves this.  The new satellites will come on-line seamlessly and you should not notice any difference to your reception (assuming that your equipment is set-up properly).

Please note that the satellites are being “replaced” and not “moved” as this would entail everyone of Sky & Freesat’s customers (several million households) requiring an engineer visit to realign their dish!

It has been commented that in the South of France, where in some cases users have lost the group of Channel 5 programmes, installing a larger dish can easily rectify the problem.  But the truth is, until the changes are complete, no one actually knows.  We do know though that here in the North we are close enough to the UK and would not have a problem.

Some Sky subscription customers may be getting an on-screen message asking them to visit a Sky website to update their viewing details.  We strongly advise that you do not do this from a French computer link as they may detect that you are accessing their system from outside the UK and subsequently switch off your viewing.  If your viewing card has been supplied by us, The info below will advise you on what to do. 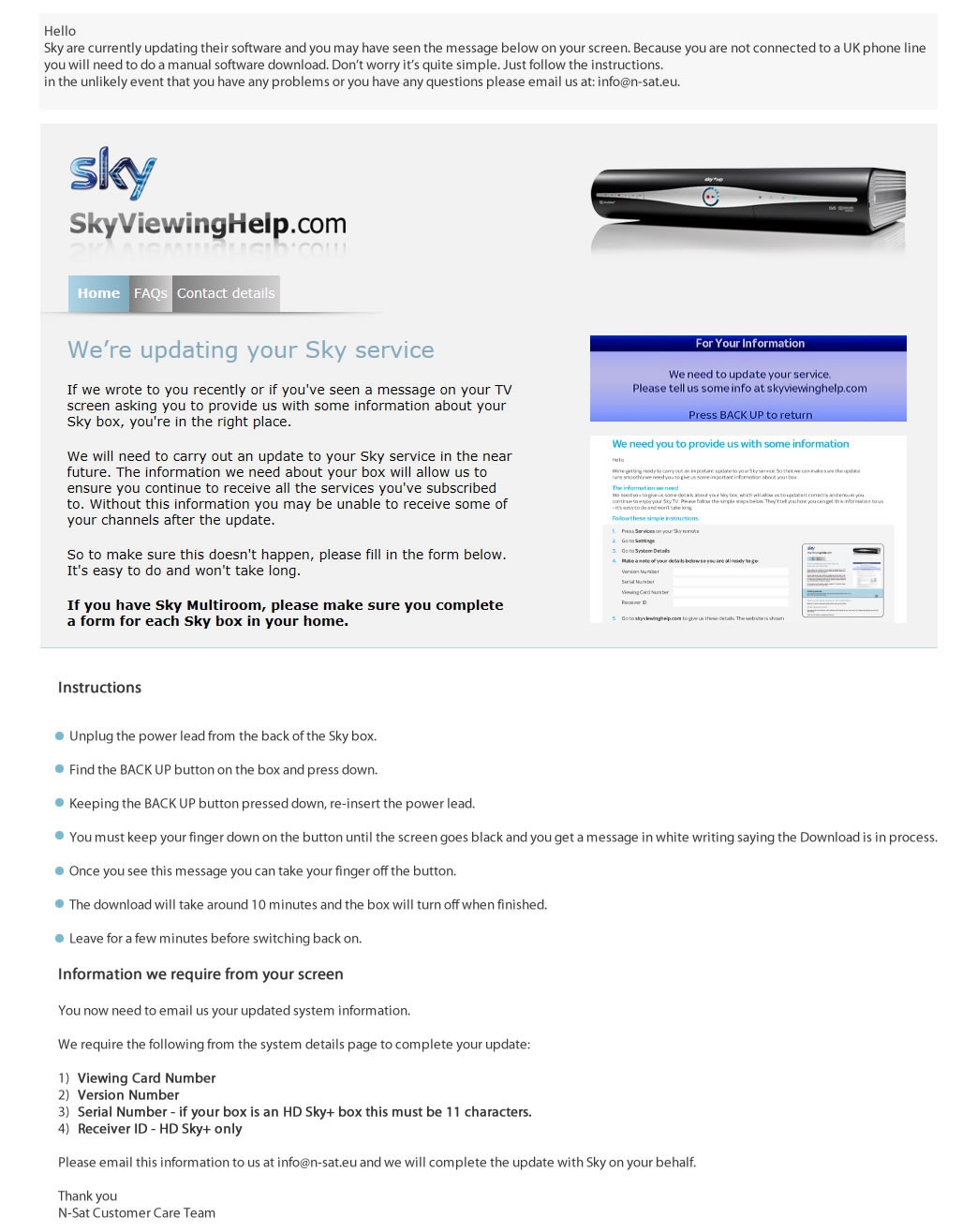 If your viewing card has NOT been supplied by us, please click here to contact us and we will let you know what to do next.  If you host your own card in the UK then it would be an idea to ask someone in the UK to complete the online form on your behalf.

From time to time you may find that some of your channels are missing. This can be due to frequencies changing when your box is switched off or, as recently (October 2012), a change to a new satellite. If you have found that you have channels missing you will need to “re-scan” to re-instate them.

On the Humax range of receivers:

5. Please note that once you perform Freesat Tune, all freesat channels will be deleted. Select Yes and

press the OK button to delete all freesat channels.

6. Select Search and press the OK button to search channels.

7. The channel search will start.

8. To stop the search, press the OK button during channel search.

9. The results will appear. Select Save and press the OK button.

Note: If there are no channels available, a message indicating the result will pop up.

On the Manhattan range of receivers:

4. The channel search will start.

My Humax Recorder keeps switching off

If your Humax box keeps going into standby, it is probably because  a new “eco” setting has been added,

To switch the setting off,

My Sky box keeps switching off

If your Sky box keeps going into standby, it is probably because Sky have added a new “eco” setting,

To switch the setting off,

Currently all of the BBC & ITV channels, Sky News & CNN are available to watch without subscription.